This Pre-Season Series will focus on those players who surged in September of the previous season, sometimes under the radar to the typical fantasy manager who was done managing and had already turned their focus towards football.

For instance, heading into the 2010 Draft how many savvy managers picked up on Jose Bautista going .257-22-10-21 in the previous September/ October, knowing then he was primed for a stellar 2010? I would venture a guess that most of the fantasy community wrote it off as a fluke, simply because Bautista was a 29-year-old, career .238 hitter who never recorded an ISO over .185 or a SLG over .420, and spent most of his days struggling to perform for one of the worst franchises in sports: the Pirates.

But what can we learn from this “Black Swan” to prepare us for future anomalies? Before we dive into our 2011 candidates, let’s examine Bautista a little more closely…

When you look at all of his numbers that are affected by plate discipline, the one area that screams “change” was his FB percentage which matter-of-factly: exploded.

Below, courtesy of FanGraphs, is Bautista’s career GB/FB/LD percentages. Do you see what this guy did from 2009 to 2010? He drastically changed his approach, turning into an extreme flyball hitter. Look at his GB%: a direct inverse. But, did he begin making this change in his approach in September of 2009? Well, if you squint at that final month of 2009 you’ll see a huge uptick in his FB percentage. 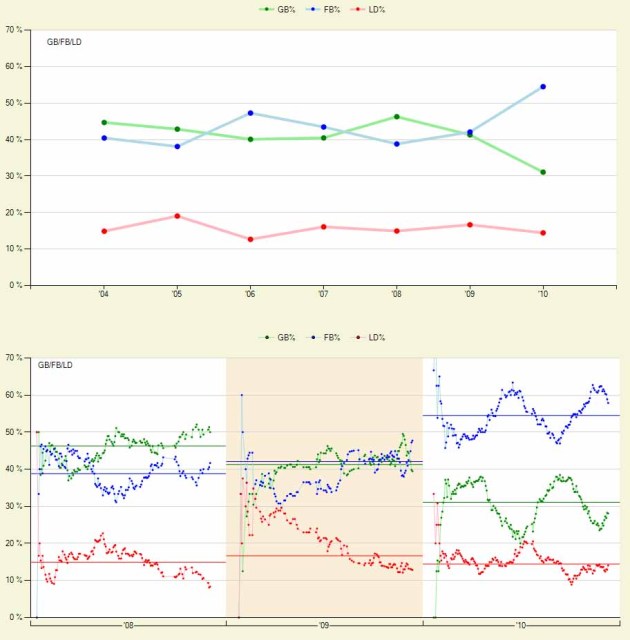