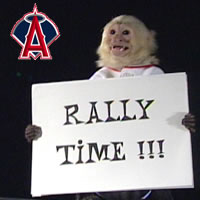 Since 2004, the Halos have won the American League West 5 times. 2010 was not one of those years. After registering 97 wins in 2009, they failed to break .500 for the first time since 2003. After Kendry “Gramatica” Morales went down like Frazier, the team lost all focus scoring 202 fewer runs than they did in 2009. They were hoping Dan Haren could save their season, but the Rangers proved to be for real…as did the A’s since they finished ahead of them as well. The Rally Monkey of 2002 seems like a distant memory, so perhaps 2011 is their year?

Heading into Spring Training, the Angels made a couple of moves to try and salvage some respect after missing out on both Carl Crawford and Adrian Beltre. The bullpen immediately becomes better with the signings of Downs and Takahashi, but there’s still Fernando Rodney who had a major meltdown after the All-Star break with a 4.96 ERA and 4 blown saves. What Rodney will we see in 2011? Your guess is as good as mine, but I have a feeling fans will be biting their nails off every time he enters the game.

Losing Godzilla, Napoli and Rivera and only replacing them with Vernon Wells and his bankroll will not help the offense. That’s a lot of pressure to put on an aging Torii Hunter and a healthy Kendry Morales. Their top 3 arms are without question the best 1-2-3 in the division with Weaver, Haren, and Santana. You know what you’re getting with Pineiro, but Kazmir could give you a L every fifth day. Without question, it’s the staff that will try and get LAAA back into the playoffs and it could happen as long as everyone stays healthy.

You know Scioscia will bring his team to play, but the roster inflexibility that Wells’ contract brings could prove costly if they need to make a deadline move. Despite being inept in areas, they will push Texas for the crown.