Fantasy Baseball Bounce Back Player Of The Week: Pablo Sandoval 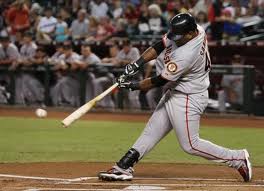 Panda is coming off a year in which he took a considerable step backwards. Through his first 2 seasons in the big leagues he had consistently performed offensively:

These stats show a player who is very consistent from a balls-in-play and batting average standpoint. Quite frankly, someone who is drafting a 3rd baseman after the first 3 or 4 rounds would love this type of production.

In 2010 someone changed the tune and forgot to tell Sandoval:

Definitely a steep fall for a player who fantasy owners had good expectations for heading into the season. Unfortunately, the Round Mound of Pound had continuing expanding in size throughout his tenure in the big leagues. I guess it does become harder to get to first base when you’re trying to drag almost 280 pounds down the base line.

This offseason Panda was able to slim down to 240 after undergoing arduous work outs and will enter the season with a renewed sense of confidence. This is roughly the same weight he was at during his breakout 2009 campaign. Drawing motivation from watching his team win the world series while he was on the bench, expect to see Kung Fu Panda back in the groove in 2011.

4 responses to “Fantasy Baseball Bounce Back Player Of The Week: Pablo Sandoval”