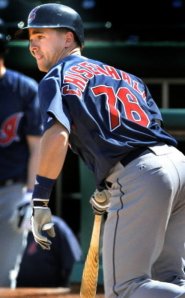 15. Lonnie Chisenhall, Cle, 3b – Chisenhall is by no means a lock to even make it past triple A this year, but because Cleveland’s infield is in shambles, especially at the hot corner (Jayson Nix anyone?), I like his chances of being brought along by mid-season to man that position.  Chisenhall put up very versatile, if not amazing, numbers in AA last year: 81/17/84/.278 in 117 games.  Plus his strikeout rate was under 17% while his BABIP was .297, a solid sign that he wasn’t just getting lucky.  He showed less power than in high A ball in ‘09, but it wasn’t too drastic of a drop-off.   He will start the year in double or triple A no doubt, but if Nix is replacement level or worse as expected, don’t be surprised to see him called up early.  3b isn’t that deep in fantasyland, so keep an eye on Lonnie Chiz during spring training; he might not be draftable, but he should be um, pickupable later in the year.  Some of the previous prospects may make an earlier impact, but Chisenhall has the potential to provide a bigger boost to your team when it counts.

14. Jake McGee TB, RP – McGee debuted for the Rays in a brief 8 game stint last fall and definitely made his mark: 5 innings, 10.8k/9, 1.8 ERA, 2.48 FIP.  He walked 3 in those 5 innings of work, but he flashed the big time #1 that MLB managers salivate over when thinking about a prototypical closer.  He was also great as a reliever in triple A last year, striking out over 14/9 and walking under 2/9 for a microscopic .52 and .6 ERA and FIP respectively.  He might still be molded into a starter by the always value maximization- conscious Rays, but he does not possess the plus secondary stuff to thrive in that role.  Tampa doesn’t have a clear cut closer going into 2011 and it could just be a committee.  If that happens and McGee succeeds in high leverage situations, he could emerge as the 9th inning guy, which would make him a steal at the end of the draft.  As always with closers, jobs are never secure (unless you have the initials M.R.), but McGee should be on your radar as March turns into April as possible relief gold.

13. Kyle Drabek, Tor, SP – Drabek, the centerpiece in the Roy Halladay trade, was very good in 2010 in double A: 7 K/9, .67 HR/9, and sub 3 ERA.  His FIP was 3.87, which could be a warning sign that he over-performed his peripherals; he also walked 3.78/9.  He had a decent debut for the Jays in September 2010, while showing solid control in last two starts, only walking 1 each game.  Drabek looks like he will make the rotation out of Spring Training, so he could be worth a flyer at the end of drafts.  He has the pedigree, he has the minor league experience, he has the stuff.  However, like other AL East starters, he faces daunting line-ups regularly so be cautious in investing too much; he also had Tommy John surgery in 2007, though he seems to have had no ill-effects thus far.  If he pitches to his potential, he could be a cornerstone of the back end of your rotation. 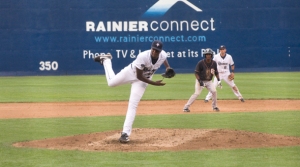 12. Michael Pineda, Sea, SP – Pineda could get a chance to start the season in Seattle’s rotation as a back-end SP after his great 2010 in double and triple A.  This giant (6′ 5″ 247) of a hurler struck out around 10 per 9 over almost 140 innings.  His home run rate shot up in AAA, but his FIP was over a run under his era in 62 innings in the on deck circle.  Pineda is only 21, but Seattle has no reason to delay the youth movement too long.  He could be a steal at the end of drafts if his K rate holds up, as Safeco should keep his hr rate manageable.  His control is an issue, but Seattle’s latest budding pitching star deserves scrutiny as a back-up starter in all deeper leagues.  He gets the edge over Drabek due to his dominating 2010.

11. J.P. Arencibia, Tor, C – Gentlemen, meet Toronto’s opening day catcher of 2011.  With the departure of John Buck and Mike Napoli (who was a Blue Jay for about 10 seconds), Arencibia is penciled in as the backstop for the Jays.  He had a legendary triple A performance in 2010 (76/32/85/.301 in 104 games) coupled with a 2 hr debut upon making the jump to the majors, which makes one dream of top ten catcher numbers without the hefty investment of a higher draft pick.  However, he stands little chance of duplicating his minor league average in the bigs – the K rate is over 20% and walk rate is under 10%, a classic high power/low average recipe. He is also a minus defender as a backstop, which will place him on the bench a good amount of the time.  Toronto’s offense is very good to great, so there is no need for them to tire out their younger version of Napoli.  But as a back-up catcher he could pay big dividends.  In the 4th and Home Catcher Rankings, he composited out to around the 17-18th best fantasy catcher.  I like him a tad higher than that, and would pick him over Pierzynski, Buck, and – sorry Jesse – Chooch.