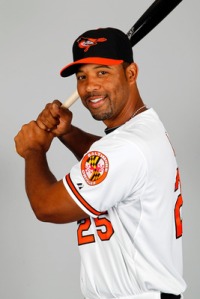 A closer look at Derrek Lee’s peripherals suggests serious unluckiness. Lee’s 2010 BABIP of .309 is his lowest since 2004 and doesn’t match his .322 career mark. The huge dip in his BABIP doesn’t jive with his 22.5 percent line-drive rate and career-low 1.3 percent infield fly-ball rate. All of Lee’s other peripherals are fairly similar to his career.

The Orioles offense looks very strong for 2011. Lee will be batting third behind Brian Roberts and Nick Markakis who get on base at a decent clip. Vladimir Guerrero, Luke Scott and Mark Reynolds will be batting behind him. Lee is hitting in a much-improved lineup and looks to have the perfect setup. Derrek Lee will have boatloads of opportunities to score and drive in runs.

Camden Yards has a 126 home run index for right-handed hitters. Compare that to Turner Field (92) and Wrigley Field (102).