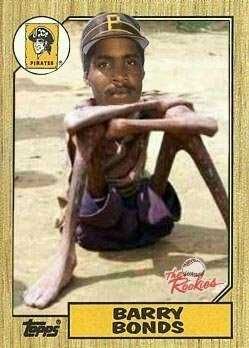 Let that sink in for just a minute, all of these statistics, awards and accolades for one man. Yet, he is still probably most widely remembered for his association with the BALCO scandal ahead of all of these other things.

This week we were reminded once again that the greatest player of his generation had to cheat to achieve that status. The government has made him the poster boy for the steroid scandal, prosecuting him for perjury and obstruction of justice and finally convicting him of the latter. They made sure that while spending $6 million we all knew about the positive steroid test from 2000, the 3 year growth spurt in San Francisco where his shoe size went from a 10 to 13, hat size went from a 7 1/4 to 7 3/8, and shirt size from a 42 to 52. Even more amazingly, his weight went from 185 while with the Pirates to as high as 260 with the Giants. Keep in mind that Bonds was 27 his last season in Pittsburgh, so not a growing teenager by any means.

While Bonds always was one of the most hated men in baseball anywhere outside  of San Francisco, these facts all fail to take into account how he mesmerized a nation back in 2001. After Mark McGwire and Sammy Sosa’s chase brought baseball back to the forefront of sports in America, Bonds’ run put it over the top. At that time, there was no one in baseball indicting these guys for how they had grown to cartoon-ish size figures accomplishing things never before seen in the sport. To the contrary, we were being regaled with tales about how lucky we were to be living during such a vibrant time for baseball fans.

Over the last several years, one after another we have had our heroes knocked down. From McGwire to Sosa, Bonds, Palmeiro, Alex Rodriguez and most recently for the second time, Manny Ramirez; we continue to see the sports biggest figures caught in this never-ending scandal. Having a young son, it makes it very hard to want to share the game with him, because who really wants to answer the question about why his favorite player got suspended. Every time I see a player who looks like he’s gained some muscle or hit a few more home runs than usual, I have to question it, and that takes a lot of the fun and child-like innocence that makes baseball so special out of the game.

I for one think these issues have helped to magnify the impact of some players who have managed to stay unstained to this point, like Ken Griffey Jr. The muddy times ahead for hall of fame votes will hopefully close the final chapter on a headache I’m sure most of us would love to see come to an end. I don’t have a vote, but if I did, I wouldn’t elect any players who we know have cheated into the hall. Even a player like A-Rod, who theoretically has the chance to redeem himself and will probably eclipse Bonds’ mark, should be viewed with a one strike and you’re out rule. If we ever want that innocence to return to the game, we can’t celebrate those who tried to take it away in its most revered place.