Well it was a sad day as I finally had to cut ties with Matt Joyce. Hey, I had to activate Jason Heyward!

END_OF_DOCUMENT_TOKEN_TO_BE_REPLACED

Andre Ethier kept his hit-streak alive with a weak infield blooper to the left side.28 and counting!

Anyway, here’s what else I saw:

END_OF_DOCUMENT_TOKEN_TO_BE_REPLACED

A Friday recap for you all. I watched about two minutes of the Mets. I turned it on and they trailed the Phillies 0-2. It was then 0-4 and I turned it off. Not even an hour later I flipped back and it was 0-10. Disgusting. Oh joy, we face Halladay and Lee to wrap up the weekend. Shoot me now.

Speaking of disgusting, can we please stop coverage of the wedding going on in England now? Shoot me again I ain’t dead yet.

Anyway, here’s what else I saw:

END_OF_DOCUMENT_TOKEN_TO_BE_REPLACED

Of note, Mitchell Boggs and Drew Storen each converted save opportunities and Storen relieved Burnett in the 8th. Need a closer? Pounce.

Wade Davis – 7 IP, 6 H, ER, 2:2…As mentioned on the air, I like Davis but his drop in K rate is worrisome. If he has to rely on his defense and praying his flyballs don’t leave the yard, he’ll experience some correction. Nice, Jesse!

END_OF_DOCUMENT_TOKEN_TO_BE_REPLACED

Some injury news to bat lead-off today…Ubaldo Jimenez was placed on the 15-day DL, but should be ready to go as soon as he’s eligible. His cut cuticle was not allowing him to grip the ball correctly. As a Ubaldo owner, the injury and he are “questionable” (not that there’s anything wrong with that) but I hope this explains his terrible Opening Day start…The battered Cubs lost both Randy Wells (strained forearm) and 2008 first-rounder Andrew Cashner (stiff shoulder) to the DL. Matt Garza, Big Z and Ryan Dempster (who has looked like garbage) will have to carry this team in hopes that they don’t fall 10 games back of the Redlegs before May 1st. The Cashner injury seems to be more serious than the Wells injury, so we’ll see what happens in the next two weeks but “stiff” and “shoulder” are not words you want to hear regarding a pitcher’s injury.

Adam Dunn, like Matt Holliday, needed an emergency appendectomy. If his recovery is anything like Holliday’s, he should be back within a week or so.

I had Joel Hanrahan ranked as my #17 closer this year (Brian had him at #18) and he already has 4 saves for the Pirates. He did give up a run, but with the Pirates he should approach 30 saves with a decent ERA and WHIP.

Jeremy Hellickson took his first loss as a major leaguer, but not after flashing why he’s a top prospect. Hellboy struck out 10 over 5.2 innings, but was done in by 3 runs on 6 hits (one of which was a HR) and 2 walks. His next start is at Fenway, but as an owner I’d be starting him against the ’27 Yankees.

Check the rankings. I told you to stay away from Chad Billingsley. After 2 games he now has a 8.00 ERA and 1.67 WHIP. Sure, April has always been one of his worst months, but I don’t trust him.

Tim Lincecum, you ARE the biggest freak! Timmy was just awesome, striking out 13 Friars over 7 innings and allowing just 3 hits and a run. I’ll take that.

Red Sox…you are now (0-5). Haha! I hate Phillie fans, I hate Yankee fans (I even hate Jersey Met fans), but Sawx fans are the worst! Ok, seriously. I figured the Tribe would get stomped once the Sawx bats woke up, but no. Adrian Gonzalez did go yard, but it wasn’t enough as Dice-K and the bullpen were throwing BP out there. Don’t panic Sawx fans, you’ll still win the East.

Mike Pelfrey and Joe Blanton, it makes me sick to watch either of you. Last night was the perfect storm. Met fans rejoice, “Big Pelf is our ace!”

The Cubs look a lot different than they did on opening day of the 2010 season.  Derek Lee and Mike Fontenot were traded during the season, manger Lou Pinella resigned, and Ryan Theriot and Ted Lilly were gone after the season ended.  The Team picked up Matt Garza, Kerry Wood and Carlos Pena in the offseason but that’s not enough to get this cursed team into the playoffs.
END_OF_DOCUMENT_TOKEN_TO_BE_REPLACED

Ryan Braun or Carlos Gonzalez at #1? That was the debate, though one guy even ranked Carl Crawford as his #1. Madness!

And…Ryan Braun takes home our #1 OF ranking, but it was close. You could definitely make an argument for either, but the composite sided with the guy who has done it more than once before. You’ll notice our individual rankings are all over the place, showcasing our different views. When compiled, it’s a pretty safe list with hidden gems when compared to the latest ADP data. There is lots and lots of value late in the draft, so if you miss out on top-tier guys while stockpiling other positions you can always get a proven vet in the 30s and 40s.

JUSTIN UPTON…Upton is coming off a year in which he took a considerable step backwards. Through his first 3 seasons in the big leagues he had consistently improved his statistics as his playing time increased, expect a bounce back this year. For more, continue reading (here).

JACOBY ELLSBURY… Remember this guy?  He’s a season removed from stealing 70 bases, scoring 94 runs, and batting .301.  Ellsbury was a wasted pick for lot of fantasy owners last year, when he missed all but 18 games, but now he’s healthy and ready to go.  I’ve seen this guy ranked all over the place (including our individual rankings) but he has the potential to be a top 10 outfielder.  Don’t wait too long to grab him. .295/90/7/55/60

BUST: MATT KEMP…Fantasy Managers have been waiting for the great Matt Kemp break out for the past couple seasons and I’m here to say they shouldn’t hold their breath.  His unsustainably high BABIP, high K% and low BB% really caught up to him in 2010.  He also forgot how to steal bases being caught almost half the time.  Questions about his desire and makeup all spell reasons to stay away as other managers continue to way over pay for Kemp taking him as early as #16 overall.  .278/85/25/85/25

Last week we looked at the September Star phenomenon and how an astute eye could have forecasted a Jose Bautista 2010 breakout. This week we take a look at our first nominee, Drew Stubbs, to determine if he’s destined for 2011 stardom.

Before we get into Stubbs’ prospects, let’s examine the last 5 years of 20-30 players:

END_OF_DOCUMENT_TOKEN_TO_BE_REPLACED

Remember When is a series of articles on nostalgia really. Something to whisk you to way back when you had that favorite player who was destined to be the greatest of all time, but something strange happened along the trip to Cooperstown.

This week, remember when….Alfonso Soriano was the most coveted second baseman in fantasy baseball? Not a slightly better than average outfielder saddling the Cubs with a $20 million dollar a year contract?? Just imagine if you will, a second baseman hitting .280 with 35+ HR’s, over 100 RBI and stealing as many as 43 bases in a single season! This is the kind of production fantasy managers generally only get in their dreams. But for 1 lucky manager in your league it was a reality from 2002-2005. 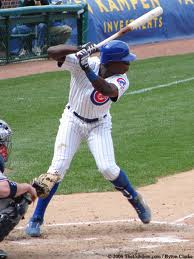 Then, Alfonso went to Washington, where all good things go to die. Suddenly defense became an issue and the outfield became the cure. That first season still seemed great, how can you complain about 46 home runs? But the eligibility definitely caused his value to take a hit. Then Soriano signed that fateful deal with the most cursed team in baseball, the Chicago Cubs. Now they’re paying all that money for this type of production:

I don’t know who I feel worse for, the Cubs, Soriano or those poor fantasy owners who thought they were in for a 10 year run of greatness…..